During the web development process, it is sometimes easy to lose sight of the ultimate goals of usability: conversions, and happy visitors. Developers, designers, and clients can all be sidetracked by minor features, small design changes, and general project hiccups; everyone is susceptible to losing perspective after being intimately involved in a project for a long period of time.

Usability testing can be the tool that brings focus to a project, and gives everyone involved an unbiased, outside perspective on how a finished website will actually be used by web visitors. Despite their value, usability tests are often overlooked. Some teams have never facilitated a test, some teams believe their projects are too small, and some teams believe the time and cost involved in testing is too high. The good news is, a usability test doesn?t have to cost a lot of money or time, can be done for any size project, and can be quite easily administered by anyone.

The simple concept behind a usability test is to bring in test subjects who fit the target demographic of the web project, allow them to use the website naturally (hopefully as they would at home) and record/observe their actions and thoughts during the process. This provides clear feedback for the team about how the site will be used by visitors, what problems people run into, what functions are intuitive (or frustrating), and what changes need to be made, if any. Making a recording of the test allows for careful study of the website interaction and resulting feedback by everyone on the development team.

A usability test doesn?t need to be an overwhelming production – at minimum a test can be conducted with one test subject, a computer workstation, a microphone, and a well written usability test script used to guide you through the interview and stay on point. Using screen capture software and a microphone, you will be able to record the conversation between the test facilitator and the subject, the subject?s thoughts, and their actions on the screen during the test. 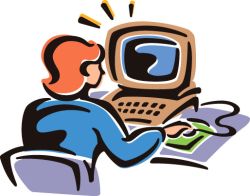 The most important part of a usability test is the facilitation. A well prepared script allows the facilitator to clearly explain the idea behind the usability test, and the importance of free-flowing, vocalized thoughts, and natural web surfing patterns from the subject. It also allows for a fun and low-pressure environment, to help elicit a good deal of natural feedback from the subject. The script should explain to the subject that they are being recorded, and that the recording will help the development team evaluate the site?s usability. It is also useful to gather basic information about the subject, and allow them to ask questions.

After introducing the idea and setting the tone for the test, it is important to have at least one task for the subject to complete, to initially direct their actions, but don?t be afraid to tailor the task to something they are naturally interested in trying. You may have a series of tasks for the subject to complete, in order to test a variety of functions on your website. Make sure to interact with your subject, in order to keep them thinking out loud. If your subject seems stuck, remind them to surf as naturally as possible, and remember to ask questions that keep them thinking like, ?What part of this page initially draws your attention?? and, ?What elements on this page are you tempted to interact with??.

If done right, usability testing can be inexpensive, fun, and eye-opening. Usability tests are the only true way to provide your development team with unbiased outside information about your website project. If you are a web developer or designer, I encourage you to gather the needed supplies, and try a usability test on your next web development project ? you may be amazed at how much information can be gathered by watching someone use your site.